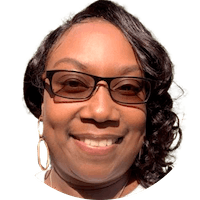 LaShelle Harris has been in healthcare since 2000 when she started her career as a CNA in a nursing home. She has worked at a nursing home and a hospital as a ward clerk while going to school at University of Louisiana at Monroe for her BSN which she received in 2005. Lashelle has worked as an RN in Med-Surg, ER, and Home Health. In 2009 she attended Grambling State University for her MSN and graduated in 2011. Since that time she has assisted at a developmental institution for two years treating all ages from twelve and up with different diagnoses. She has also assisted in rural communities in Arkansas and was the sole provider at a clinic for four years and also worked in hospice. Afterwards, she returned to her passion and became the PCP for patients in their homes who suffered from anxiety that was heightened during the pandemic. She is committed to helping anyone overcome any challenges they are currently experiencing.
In her free time, LaShelle enjoys spending time with her husband of seventeen years and their two daughters.

There is hope, even when your brain tells you there isn’t. - John Green