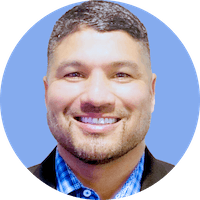 Jesus Sabala began his journey in the United States Navy. He served 5 years as a Corpsman, where he worked in the Naval Hospital and deployed with the Marines. He then pursued his bachelor’s degree in nursing from California State University, Chico. He spent 10 years in a level II trauma center, in the emergency department. In 2015, he was meritoriously promoted from Staff Nurse II to Staff Nurse III through Professional Development. He was nominated to be Chair of the Trauma Committee from a Co-Chair position. He actively participated in the Emergency Preparedness Committee, where he attended several Federal Emergency Management trainings. He later transferred to the Interventional Radiology department. He then decided to pursue his master’s degree as a Nurse Practitioner at the University of Southern California. During his free time, he enjoys spending time with his family and his two Boxer dogs. He loves to explore sunny San Diego and enjoy discovering new places to eat. He enjoys running and cycling. Watching 49ers football is one of my biggest pastimes.

There is hope, even when your brain tells you there isn’t. ― John Green